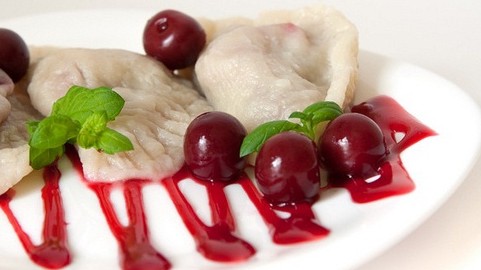 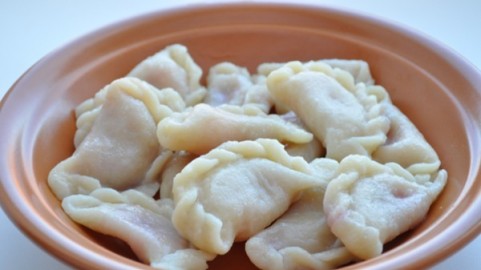 Type: Desserts
Servings: 6
Ready in: 1,5 hours
Calories: Middle
If you've read 'Evenings on a Farm near Dikanka' by Russian classical writer Nikolai Gogol, you surely remember how adroitly one of the characters ate vareniki with sour cream that flew into his mouth by themselves. Of course, traditional Ukrainian vareniki don't have such super skills, but their taste is sure to make you think of the Ukrainian cuisine's magic.
Ukrainian vareniki are often compared to Russian pelmeni or Italian ravioli. Vareniki's crucial difference from other similar dishes is their dough. Traditional Ukrainian vareniki can't be Lenten, that is, kefir and eggs are always added to the dough.
What are vareniki like? Nikolai Gogol wrote that you could eat hat-sized vareniki at some farms. That's, of course, an exaggeration. The classical varenik is around 10 cm large and, contrary to pelmeni or ravioli, has a crescent shape.
Vareniki's filling can be very different: potato, cabbage, potato and meat, potato and salo (pork meat), sweet or salted curd, pumpkin, cherries and so on. The filling is warped up in dough and cooked for five minutes or less. Vareniki are usually served with sour cream.
Although it's truly Ukrainian dish, vareniki are well-known all over the world. People in different corners of the world took liking of vereniki's unusual and rich taste and installed monuments to varenik. In particular, Ukrainian varenik was immortalized in Canada and Russia.

Stages of cooking
1
Sieve the flour in the bowl. Make a well and pour warm water in here; then add the butter, a pinch of salt and make stiff but elastic dough.
2
Roll the dough in plastic wrap and set aside for 1 hr.
3
Wash and deseed the cherries. Then add the sugar so the cherries will give some juice. Pour off the juice and set aside; dust the cherries with flour and stir a little.
4
Then roll out a thin big tablet and shape 5x6 cm circles with a glass. Put the cherries in the middle and shape crescent-shaped dumplings.
5
Simmer the dumplings for 3-5 mins in salted water. Take them out and place in the bowl.
6
Serve with sour cream and prepared sweet juice.

Classic Honey Cake
The Classic Honey Cake or Medovik is an authentic Ukrainian cake, considered to be one of the most popular desserts in Slavic countries. According to the classic recipes, the honey cake is made with several layers. It takes a little to bake, but the whole process might take some patience.
Read more
Beetroot Soup (Kholodnik)
The cold soups are very popular during summer season. Two most famous Ukrainian cold soups are okrosha and beetroot soup (commonly known as kholodnik or svekolnik). There are both lean and meat beetroot soups.
Read more
Thick Pancakes
In Ukraine thick pancakes are traditionally served for breakfast. These are small puffy pancakes fried from both sides on the pan. They can be of different kinds: sweet, salted, with or without filling. Sweet thick pancakes with raspberries or apples are the regular choice for breakfast. Along with many other Ukrainian dishes, pancakes are served w
Read more
Beetroot Salad with Horseradish
It is very delicious and easy-to-cook traditional Transcarpathian dish. Usually it complements the meats. The salad can be cooked beforehand as it might be stored in the fridge in a sealed glass jar.
Read more