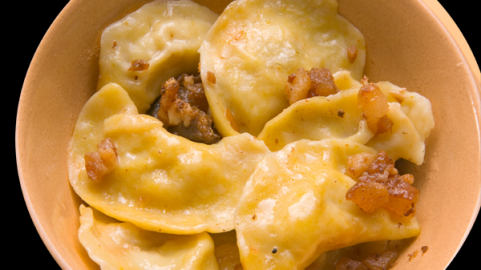 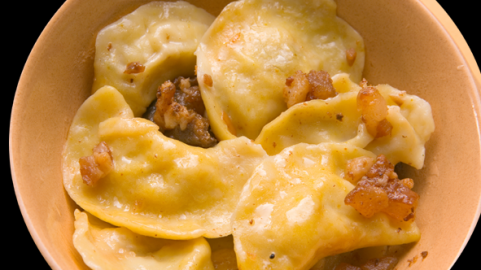 Type: Mains
Servings: 6
Ready in: 1 hour
Calories: Middle
If you've read 'Evenings on a Farm near Dikanka' by Russian classical writer Nikolai Gogol, you surely remember how adroitly one of the characters ate vareniki with sour cream that flew into his mouth by themselves. Of course, traditional Ukrainian vareniki don't have such super skills, but their taste is sure to make you think of the Ukrainian cuisine's magic.
Ukrainian vareniki are often compared to Russian pelmeni or Italian ravioli. Vareniki's crucial difference from other similar dishes is their dough. Traditional Ukrainian vareniki can't be Lenten, that is, kefir and eggs are always added to the dough.
What are vareniki like? Nikolai Gogol wrote that you could eat hat-sized vareniki at some farms. That's, of course, an exaggeration. The classical varenik is around 10 cm large and, contrary to pelmeni or ravioli, has a crescent shape.
Vareniki's filling can be very different: potato, cabbage, potato and meat, potato and salo (pork meat), sweet or salted curd, pumpkin, cherries and so on. The filling is warped up in dough and cooked for five minutes or less. Vareniki are usually served with sour cream.
Although it's truly Ukrainian dish, vareniki are well-known all over the world. People in different corners of the world took liking of vereniki's unusual and rich taste and installed monuments to varenik. In particular, Ukrainian varenik was immortalized in Canada and Russia.

Stages of cooking
1
Peel and dice the onion.
2
Heat the vegetable oil in the frying pan; brown the onion.
3
Chop the sauerkraut and fry a little in vegetable oil.
4
Combine the sauerkraut with 1/3 of browned onion. Set aside to cool.
5
Mix the salt, soda, kefir; stir thoroughly.
6
Stir though the flour.
7
Make dough on a flat working surface.
8
The dough shouldn’t be sticky but stiff and thick.
9
Split the dough into two rolls and cut them into little pieces.
10
Shape thin tablets with rolling pin.
11
Spoon the stuffing in the middle of the tablet and stick edges together.
12
Cook the vareniki in salted water for 3-4 mins.
13
Season the finished vereniki with the remaining browned onion.

Kissel
Kissel is an original drink that is highly valued for its perfect taste, excellent aroma and useful properties, since Kievan Rus times. In Rus fragrant and tasty kissel was made from oats, wheat and other cereal crops. Now it is boiled mostly from fresh or dries berries and fruits, fruit-and-berry juices and syrups adding potato or corn starch, whi
Read more
Salad with Radish and Nuts
As far back as Kievan Rus epoch, the people managed to prove the radish’s medicinal properties and therefore invented lots of mouth-watering and beneficial recipes with radish.
Read more
Homemade sausage
It's impossible to imagine authentic Ukrainian cuisine without homemade sausage. This is an absolutely natural and unique product. Meat (often pork, sometimes beef) and salo (pork fat) are used in order to cook homemade sausage. Pig's gut is stuffed with meat and salo, boiled, and then fried on pan or baked in oven Homemade sausage is traditional U
Read more
Lenten Godz
Traditionally, this dish is cooked over fire outdoors in a big kettle and is considered to be one of the protagonists on vibrant Ukrainian feasts and weddings. In general, it is an aromatic soup that bears a vague resemblance to rassolnik. The meat godz is made with meat bones stock. This recipe is tailored to be made at home and it will be as tast
Read more