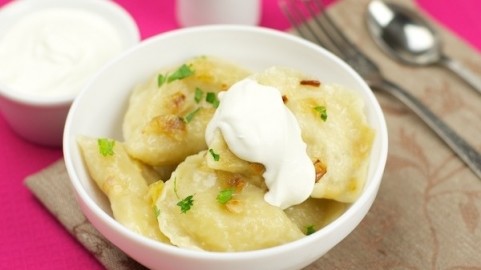 Type: Mains
Servings: 6
Ready in: 45 min.
Calories: High
If you've read 'Evenings on a Farm near Dikanka' by Russian classical writer Nikolai Gogol, you surely remember how adroitly one of the characters ate vareniki with sour cream that flew into his mouth by themselves. Of course, traditional Ukrainian vareniki don't have such super skills, but their taste is sure to make you think of the Ukrainian cuisine's magic.
Ukrainian vareniki are often compared to Russian pelmeni or Italian ravioli. Vareniki's crucial difference from other similar dishes is their dough. Traditional Ukrainian vareniki can't be Lenten, that is, kefir and eggs are always added to the dough.
What are vareniki like? Nikolai Gogol wrote that you could eat hat-sized vareniki at some farms. That's, of course, an exaggeration. The classical varenik is around 10 cm large and, contrary to pelmeni or ravioli, has a crescent shape.
Vareniki's filling can be very different: potato, cabbage, potato and meat, potato and salo (pork meat), sweet or salted curd, pumpkin, cherries and so on. The filling is warped up in dough and cooked for five minutes or less. Vareniki are usually served with sour cream.
Although it's truly Ukrainian dish, vareniki are well-known all over the world. People in different corners of the world took liking of vereniki's unusual and rich taste and installed monuments to varenik. In particular, Ukrainian varenik was immortalized in Canada and Russia.

Stages of cooking
1
Wash, peel and cut the potatoes into big pieces.
2
Cook the potatoes in the salted water for 20-25 mins.
3
Peel and dice the onion.
4
Heat the vegetable oil in the frying pan; brown the onion.
5
Pour off the water from boiled potatoes; mash it. Add the 1/3 of fried onion, butter, pepper, salt and stir well. Set the stuffing aside to cool.
6
Combine the kefir of a room temperature, soda, salt and stir well.
7
Stir the flour through and make dough.
8
The dough shouldn’t be stick but stiff and fully combined.
9
Split the dough into two rolls and cut them into little pieces. Shape thin tablets with rolling pin. Dip each side of the table in the flour.
10
Spoon the stuffing in the middle of the tablet and stick edges together.
11
Put the finished vareniki on the flat working surface and powder with flour.
12
Cook the vareniki in salted water for 3-4 mins.
13
Season the cooked vereniki with the remaining browned onion and serve with sour cream.

Shynka
Shynka (baked ham) is a traditional Ukrainian dish. It is cooked of piece of meat (chiefly of pork) seasoned with salt, pepper, minced garlic and other spices before baking it in the oven. As many Ukrainian dishes, the shynka has it overseas analogues. Therefore, Austria and Germany boasts Schweinsbraten, and Quebec has rôti de porc, which literall
Read more
Pennik with Apricots
The Ukrainian apricot pie or pennik is vitamin-rich and easy-to-cook dessert.
Read more
Potato Yushka with Marrows
Yushka is a traditional Ukrainian pottage. Earlier 'yushka' was a name for meat and fish broths that were basis for the majority of liquid dishes, in particular for ukha. Later, however, potatoes and other vegetables, pasta, beans, mushrooms and various cereals became yushka's components. Yushka is cooked differently in different regions of Ukraine
Read more
Bukovina
It’s a traditional Ukrainian salad. The vegetables add the freshness to the salad, and the sausage and potatoes make it a nutritious meal.
Read more