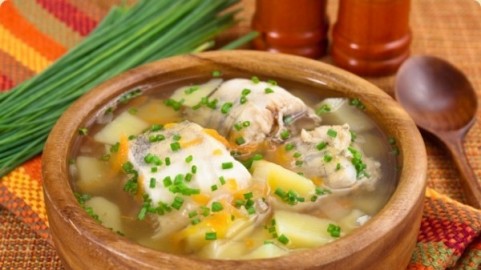 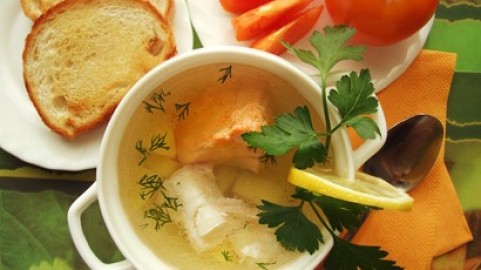 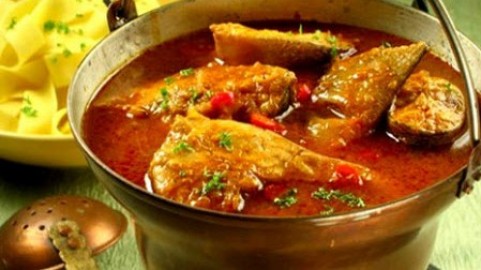 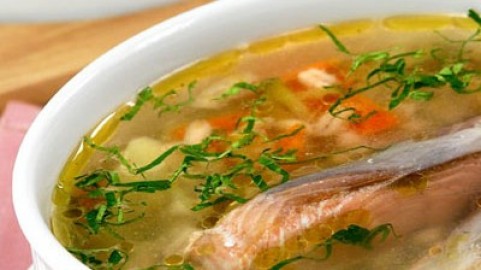 Type: Soups
Servings: 6
Ready in: 2 hours
Calories: Middle
Ukha is thin hot fish dish, somewhat reminiscent of fish soup. Zaporizhian Cossacks used to cook it during their campaigns, since they could catch fish in the river, and vegetables were always at hand.
Different fish - mostly crucian, perch, redeye, carp - is used for making ukha. At the same time it is not recommended to make ukha from herrings, bream, roach, Caspian roach and sea roach. Firstly, the broth is made out of fish: it is boiled at low heat, without bringing to vigorous boil. Boiling time depends not so much on fish kind as on fish size: the larger the fish is, the longer it is cooked. The dish's specific is its totally transparent broth.
Then vegetables and different spices - from black pepper to saffron - are added to the broth and attach rich aroma to it. You can also give unusual taste to ukha by adding 50-100 g of vodka.
Ukha is the first course that may be served to festive or everyday table. The same as kulish, it is better to cook ukha outdoors.

Stages of cooking
1
Cover the fish’s head and tail with water and cook for 25-30 mins. You won’t need them then.
2
Cut the fish into little pieces.
3
Chop the onion.
4
Grate the carrot on a medium grater.
5
Dice the potatoes, and add them to the boiling stock. Season it with pepper and salt.
6
Bring the potatoes to the boil, then add the fish and cook for 15 mins.
7
Add the carrot.
8
Add the onion and cook for 5-7 mins.
9
Add the bay leaf and pepper. Put it aside to rest for 25-30 mins. Serve it drizzled with herbs.

Beetroot Soup (Kholodnik)
The cold soups are very popular during summer season. Two most famous Ukrainian cold soups are okrosha and beetroot soup (commonly known as kholodnik or svekolnik). There are both lean and meat beetroot soups.
Read more
Cottage cheese pancakes
Cottage cheese pancakes are national Ukrainian dish, with curd being its main ingredient. Many ask why curd pancakes are called 'cottage cheese pancakes'! The answer is simple: in Ukraine curd is commonly called cottage cheese, and from here the dish's name derives. The main ingredients are curd (dry is the best), eggs and flour. The pancakes may b
Read more
Lamb Dushenina
The Lamb Dushenina is an age-old national Ukrainian dish, that as a matter of fact is meat braised with vegetables, however the vegetables are the subject to every cooker and their selection depends on his tastes and preferences. The dish is cooked either in a deep casserole over stove, or in a clay pot in oven, that also depends on cooker’s wish.
Read more
Baked buns with chicken and mushrooms
The farinaceous food is widely common in Ukrainian cuisine. The one of the most popular dishes is buns (pyrizhky). They are crescent-shaped or long-shaped stuffed pastry buns. In old times, they were the protagonist of every feast in Ukrainian house. Buns can be baked or fried; made of yeast dough or short pastry; they can be sweet or savory. Also
Read more