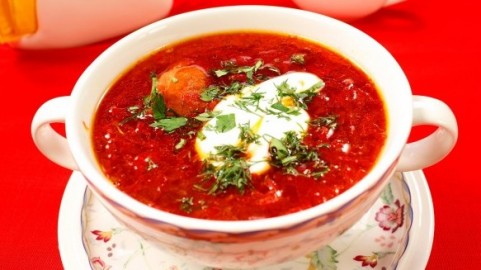 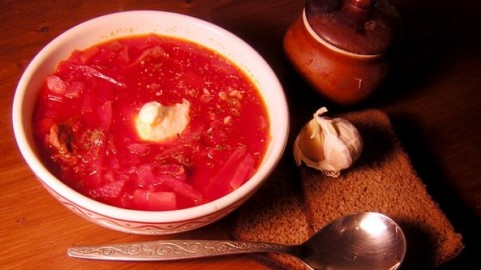 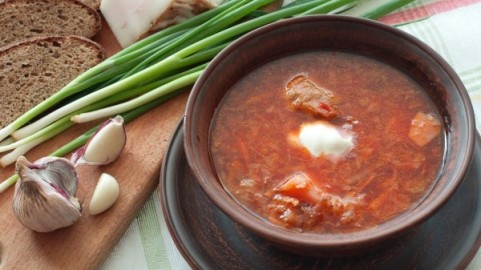 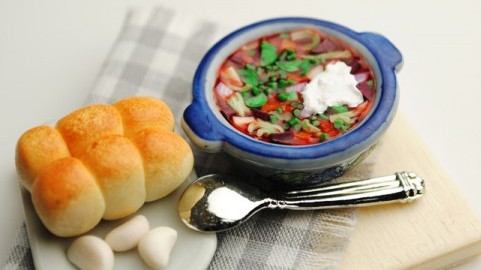 Type: Soups
Servings: 6
Ready in: 2 hours
Calories: Middle
Tasty and fragrant borsht is the rich Ukrainian cuisine's trademark, in regard this original dish was described in literary works by Ukrainian and Russian classical writers for a reason. You won't find a housewife in Ukraine, who can't cook borsht, although it's not the simplest dish at all. It has plenty of components and complicated cooking technology.
Borsht has many varieties and is cooked differently in different regions of Ukraine. Everything depends on products' combination and they can be very different. However, its main component - beetroot - is used in any kind of borsht without fail. It is beetroot that gives borsht its distinctive red color. Another first course's invariable ingredient is meat: it might be pork, beef or poultry depending on cooker's preferences. There is vegetarian borsht, though, where meat is usually replaced with kidney beans.
Containing multitude of ingredients - mainly meat, various vegetables and seasonings, as well as pork fat with garlic in some recipes - borsht definitely helps to strengthen immune system and keeps from catching cold in winter.
However, Ukrainian borsht's main advantage is its unbelievable taste! Freshly cooked borsht has an incomparable scent, and there is no substitute for its rich taste in the world.
Borsht is regularly served with sour cream and pampushkas with garlic.

Stages of cooking
1
Cook the meat broth. Gather the fat formed during the cooking in the bowl.
2
Peel and rinse the beetroot. Then either shred it finely or grate it coarsely. Add the vinegar, sugar, tomato paste and braise it in fat gathered during cooking of the broth. Braise until half-ready; add a little of broth if necessary.
3
Chop the carrot, celery and parsley roots, slice the onion; and then brown everything in preheated sunflower oil or lard.
4
Put the diced potatoes in the boiling stock; then bring to the boil. Add the shredded cabbage and cook for 10-15 mins. Then add the braised beetroot, browned vegetables, allspice, salt and bay leaf.
5
Brown the flour with a little water or broth in dairy butter. Put it into the broth and cook for 5 mins more.
6
Dress the finished borsht with salted pork fat minced with garlic and parsley. Bring back to the boil and set aside for 15-20 minutes covered with lid.
7
Put the pieces of meat in every plate, drizzle with chopped herbs and dress with sour cream before serving it to the table.

Cottage Cheese and Carrot Cakes
It is an original and interesting dish made of carrot. These cakes are served hot complemented with sour cream.
Read more
Potato zrazy
Although they were invented in Lithuania, potato zrazy are traditional Ukrainian dish - Ukrainians substantially changed and enriched the recipe. Ukrainian zrazy are stuffed potato. The filling can be different: meat, cabbage or mushrooms. Along with majority Ukrainian dishes zrazy are very rich, therefore, 2-3 pieces are enough to satisfy hunger p
Read more
Vegetables Salad
It is a light vegetables salad that will compliment any meat dish or garnish, and its preparation won’t take long.
Read more
Potato Yushka with Marrows
Yushka is a traditional Ukrainian pottage. Earlier 'yushka' was a name for meat and fish broths that were basis for the majority of liquid dishes, in particular for ukha. Later, however, potatoes and other vegetables, pasta, beans, mushrooms and various cereals became yushka's components. Yushka is cooked differently in different regions of Ukraine
Read more